Over the past few months, my Facebook feed has been showing numerous, very alarmist ads from allegedly “humanitarian” Western NGOs, about the alleged “threats” faced by people in the various portions of Syria that the central government has been retaking  from the well-armed, extremist-dominated rebels who have controlled them for some years. On the right is one recent such ad, from the International Rescue Committee (IRC).

A number of things strikes me about these ads:

For some time now, I’ve been concerned about the increasingly political– and I should specify, pro-“Western”, pro-militarist– nature of organizations like the IRC, Mercy Corps (which also sends me lots of similar ads), or Human Rights Watch, or even Amnesty International.

Back in 1990, you will recall, Amnesty played a particularly dirty role in the “Kuwaiti incubators” affair. That year, when Iraq was illegally occupying Kuwait, many people in the United States and other Western countries were deeply moved– and in many cases, moved squarely into the pro-war camp— by the “Nayirah” testimony, in which a young Kuwaiti teen tearfully told a US Congressional group that Iraqi soldiers had looted incubators from Iraqi hospitals, tossing out the  babies who’d been in them. That testimony was later revealed as completely baseless, and “Nayirah” herself was revealed to be the daughter of the Kuwaiti Ambassador in Washington, who had never been in Kuwait during the occupation by Iraq, as she had claimed.

One of the many very troubling aspects of the Nayirah testimony was that at the time, Amnesty corroborated her claims. In a news conference that Pres. GHW Bush gave on Oct. 9, 1991, as he worked to ramp up support for U.S. military action against Iraq, he cited Amnesty’s reporting on a number of alleged Iraqi atrocities– including on the incubator incident, noting that Amnesty had been “debriefing many of the same people at the border [as had Nayirah’s alleged sources.]”

Thus, in the context of a U.S. president working to gin up support for an upcoming war, we saw Bush citing the (as it turned out, completely baseless) claims made by a non-governmental group whose stated raison d’etre had always until then been to rein in and end abuses committed by governments. Go figure.

In recent months, when I started seeing the IRC’s series of extremely one-sided Facebook ads about Syria– they circulated similarly alarmist ads earlier about “Aleppo” and “Eastern Ghouta”– I felt similarly upset at seeing an organization that had originally been founded to provide humanitarian relief to those fleeing Nazism now being so fully co-opted into the partisan, imperialist/militarist agenda of those working for regime change in Damascus.

Over the years, I’ve had quite few dealings with the IRC in my hometown of Charlottesville, VA, where they have a significant “resettlement hub” that is run (under contract from the US government) to provide services to some of the refugees taken in by the United States and resettled in Charlottesville. So I started researching the organization a bit more. Here is some of what I found, both from the 2016 version of the “990” form that they have to file annually with the IRS (downloadable e.g. here in PDF)  and from Wikipedia.

(A) The IRC may present itself as a worthy citizen organization, and one that desperately needs money from the general citizenry, as claimed in its Facebook ads. But actually, in 2016, it got $415.4 million of its $727.8 million in revenues (57%) from government grants. (Also, that year, its revenues exceeded its expenses by $33.7 million.)

(B) Its Executive President is David Milliband, the former UK Foreign Secretary. For working 37.5 hours/week for the IRC that year, he took home a compensation package totaling $886,884. I imagine that by now it is more?

(C) On its website, IRC lists its board members, many of whom are CEOs of big US corporations or big financiers. It also lists a roster of “Overseers”, who “provide advice on policy, advocacy, fundraising and public relations.” They include Madeleine Albright, Henry Kissinger. Need I say more?

The IRC’s Wikipedia page currently has a couple of big flags on it, saying:

Nonetheless, the page does provide a lot of very revealing information about the organization, and some useful links that I plan to follow up. Like this one, to a  very expensive book titled “Covert Network: Progressives, the International Rescue Committee and the CIA.”

Here’s what I think are some key paras in the Wikipedia page: 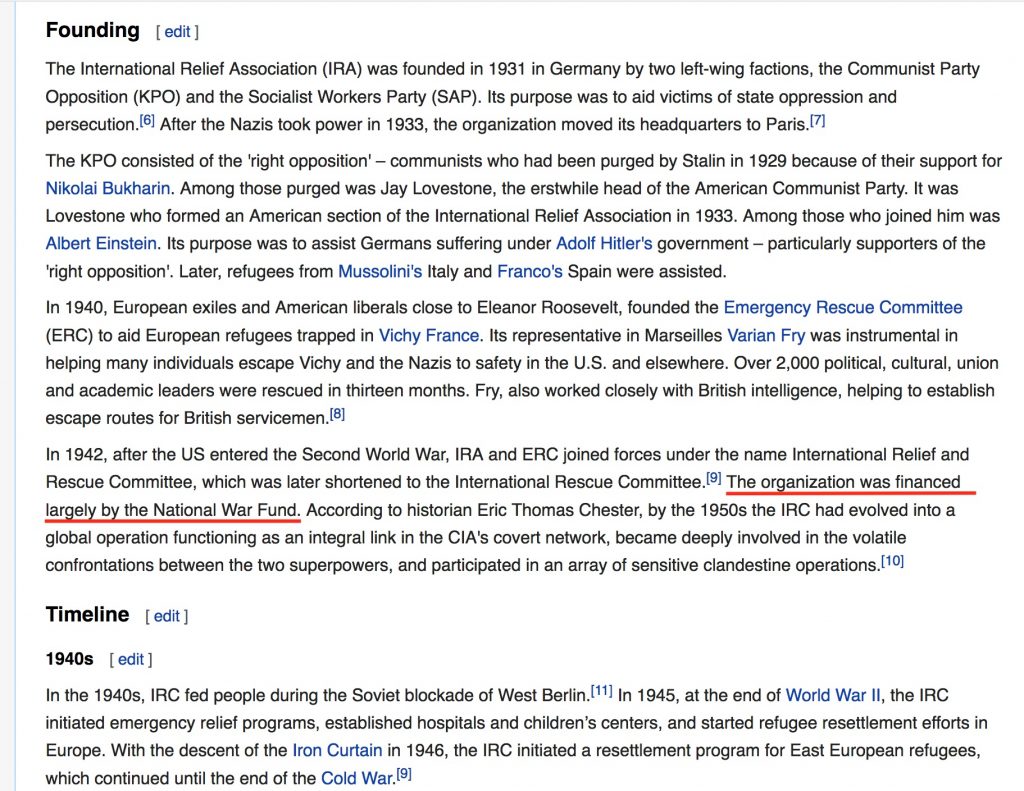 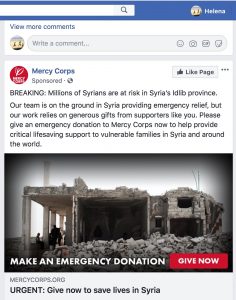 … So, in light of all of the above, I started to re-think the goal of all those ads– from Mercy Corps, as well as the IRC– that I keep seeing on my Facebook page.

Neither of these organizations needs the paltry number of $$ that I might be able to donate to them, if so moved. Neither do their heads who (like the heads of Human Rights Watch or Amnesty) pull in salaries that are more than 20 times what I ever earned at the height of my career as a researcher, writer, and columnist.

Despite all their window-dressing, these are not (any longer) organizations that are earnest, grassroots-based endeavors to pool the efforts of a great mass of citizens to work for the common good. No. They are an adjunct to the military-industrial complex– one that I like to call the Humanitarian-Interventionist Complex.

Of course, throughout the centuries of Western imperialism and colonialism, these countries’ leaders have always attempted to “sell” their more aggressive/imperialist military actions against other countries to their domestic publics as being in some way “humanitarian” ventures. That tradition goes back a long way, and has been revived in many new forms since the advent of social media. Libya and some of the stages of the US-led war effort in Afghanistan (“save the poor Afghan women”, etc) are just some recent examples.

But Syria seems to be the place where the Humanitarian-Interventionist Complex has in recent years had the greatest amounts of US/Western government funding to play with… and they’ve used a portion of that funding to help their governmental backers gin up support for Western war aims there.

And that, it seems to me, is what most of those social-media ad buys from HIC groups like the IRC or Mercy Corps are really aiming at. They truly cannot care very deeply if you or I would respond to the ad by giving them our paltry donation. But what they principally aim to do, on behalf of their governmental and big business backers, is to keep framing the narrative that the real story in Syria is one of “innocent civilians facing a dire threat from the Syrian government.” They bring the names of those allegedly threatened communities constantly to people’s attention: “Aleppo”!”Eastern Ghouta”! “Idlib”! (How many Americans, honestly, could even find these places on a map, know how to pronounce their names, or know anything about the people who live there and what they lived through during their time under the control of the “rebels?)

… And the credibility that these HIC organizations have with the generally “liberal” portions of the Western public is a huge political asset to the warmongers.

So it’s Nayirah’s testimony all over again, re-made for a social-media environment. Don’t click on the “Donate” button of such organizations. If you do want to give to an organization that provides relief services to the war-ravaged people of Syria on a basis of non-partisanship and need rather than Western war aims, then probably giving to the International Committee for the Red Cross would be your best bet…